The Mission Impossible franchise is one of the longest running action movie franchises in Hollywood, with its first movie dating back to 1996. 19 years. 5 movies. 1 Tom Cruise. In an age where Marvel has built an empire out of 12 movies in less than 8 years (the Marvel Cinematic Universe kicking off in 2008 with Iron Man) it’s interesting to compare how the Mission Impossible franchise has evolved, survived, and also– improved, throughout the years. 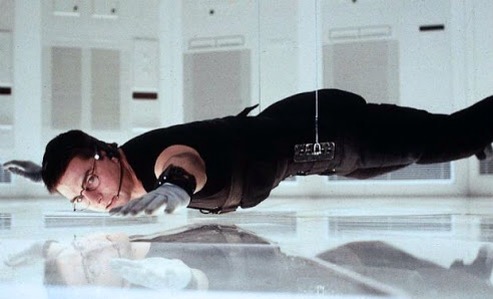 The first instalment in the series, and an adaptation of the original 1966-1973 TV series (I know, I just found out too) which, surprisingly, wasn’t received too well by the original cast of the TV show. They thought that the movie veered closer towards the action-adventure genre, thus taking away from the classic “mind game” of the original Mission. It wasn’t held to critical acclaim, but it wasn’t terrible either. I, personally, enjoyed the movie, but nothing particularly stood out to me as genre-defining or #iconic, except maybe the scene from the screencap above, yeah. It was a standard contemporary action-spy flick, with neo-noir elements that gave it some form of character, but what really brought it to heights was Tom Cruise.

In MCU terms, you could liken him to Robert Downey Jr. in the sense that he is the driving force behind the series. Granted, not all 11 MCU movies feature Iron Man, but he brought spark to the franchise, building the foundation for subsequent movies and acting as a very, very reliable anchor. (An anchor that keeps the $$$ in place, that is.)